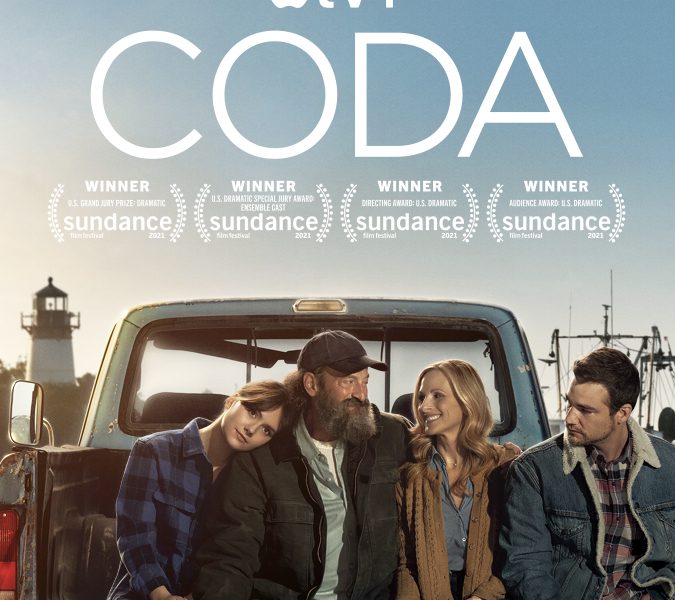 CODA is a mainstream film in which the Deaf characters are played by Deaf actors, and it is funny, emotional, excellent, informative and entertaining. With a good portion of the dialogue in American Sign Language (with subtitles), it strikes a blow for Deaf and Disability equality.

CODA, which is an acronym of ‘child of deaf adults’, is written and directed by Sian Heder, and stars Emilia Jones as Ruby Rossi, a young girl who is the only hearing member of a Deaf family. Her parents—Frank, played by Troy Kotsur, and Jackie, played by Marlee Matlin—and older brother, Leo, played by Daniel Durant, are all culturally Deaf. The parents lean on Ruby, their only hearing family member, as they navigate the hearing world; she interprets everything from doctors’ appointments to business deals. Over the course of the movie, Ruby must decide between staying to help her parents and the dream of attending college on a music scholarship. Discrimination is shown as part of their lives. The story is quite staid, but the interactions of the four leads and the many sub plots are beautiful.  Emilia Jones had to learn American Sign Language and to sing to play the part so convincingly. Apart from the three Deaf actors, there were two Deaf ASL experts working on the film to develop the sign language used.

It is a remake of a French film from 2014, La Famille Belier, which featured a dairy farm with a deaf family and a hearing daughter who wanted to be a singer. The key difference is that all the main actors in the French film were hearing actors playing Deaf people. The producers of the original French film wanted an English version that was also different. Sian Heder (writer of smash TV series ‘Orange is the New Black’ set in a women’s prison), as writer/director, fought for casting Deaf actors to play the Deaf parts. Early on enlisting Marlee Matlin to play Jackie, Heder along with the veteran Deaf actor resisted all pressures to cast well known hearing actors and to alter the script. 40% of the film is in American Sign Language.

Marlee, at age 21, won an Oscar for ‘Children of a Lesser God’ (1986). She has had a long career including many movie and TV credits, from guest appearances on shows like Seinfeld, ER, and Desperate Housewives, to beloved recurring roles like The West Wing’s Joey Lucas, The L Word’s Jodi Lerner, and even a stint as Marlee the Librarian on Blue’s Clues. She has long wanted to share with audiences the beauty of an ensemble piece of Deaf actors using their sign language. In several interviews about casting the film, Matlin has said “being Deaf isn’t like a costume you can take on and off. Enough of that.”

Disabled characters are vastly underrepresented in film and television

Though about 25% of Americans are Disabled in 2019, only 3.1% of series regular characters were Disabled, and that was a record high. When Disabled characters do show up, they’re frequently created by non-Disabled writers and played by non-Disabled actors. Known in the Disabled community as “cripping up”, it’s a frustrating phenomenon not only because it takes work from Disabled actors, but also because it upholds inauthentic portrayals that perpetuate stereotypes. There are not many Disabled actors with name recognition who can generate interest in a project. The nomination of Crip Camp (2021) for best documentary was a welcome change and featured in our last issue. Now, CODA was picked up at Sundance for a record-breaking $25 million deal, proof that audiences and studios are hungry for inclusive and authentically made content.