“We never had any doubt”

Ethan Dunkley and his family talk about his journey through mainstream education so far. 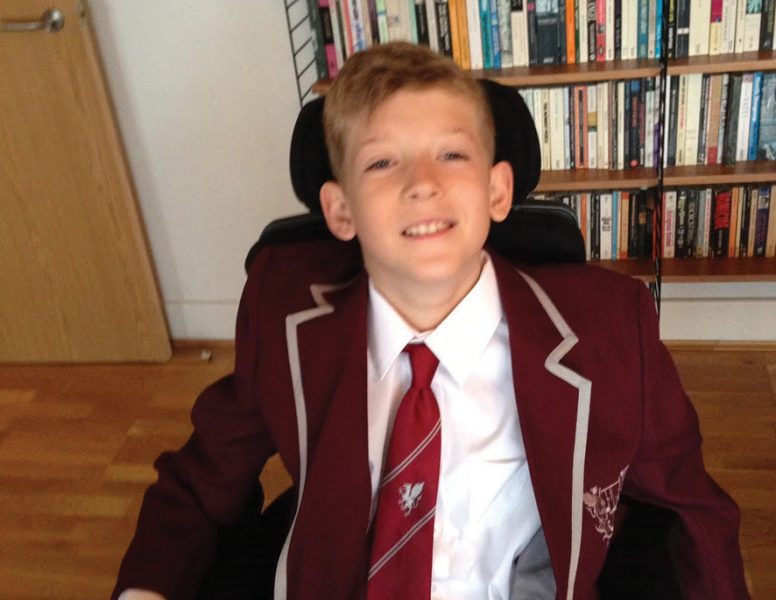 Ethan Dunkley is in Year 12 at City of London Academy, Islington. He has cerebral palsy and his parents have struggled to keep him in mainstream state education for the last fourteen years. Ethan and his parents Maria Larrain and Ian Dunkley spoke to Inclusion Now about their experiences.

Maria: “We never had any doubt that Ethan should attend a mainstream state school. We as parents believed this strongly as we think mainstream is better provision and was the best way for Ethan to be part of the community. He was already in a mainstream nursery and we could not envisage him attending a special needs school. They are not stimulating, the work rate is really slow and he would not be mixing with a wide range of children. A friend suggested Grasmere, a one form entry primary school in Hackney, which had a stair lift. The head was very nice and welcoming and at that time Ethan was not using a wheelchair so we thought it would be OK. The school provided excellent teaching assistants.”

Ethan’s thoughts on primary school. “I remember Mum having to push me up the kerbs as they were not dropped on the way to school. I had to start again as none of my friends from nursery moved to this school with me. We had one teacher a year and subjects were not broken down as they are in secondary. Mostly I remember my teaching assistants, especially Luigina. She had great patience and she taught me to recognise letters and then read and spell and use bricks for counting”.

“We went on lots of trips which I was always included in. We went to the Rio Cinema a number of times and in Year 6 we went away for four nights to an outdoor centre called Kench Hill. We also had a trip to Parliament. The same sex marriage act was being debated. My TA managed to sneak me in my wheelchair into the Commons and I heard the debate. This was the main catalyst for my passion for politics.”

Did you have friends at the school? ‘’To start with no as I am quite shy, but later in KS2 yes. Aaron, Page, Luke and Arthur were my friends. They came to my house which is accessible, but I could not go to theirs when they had parties. We went bowling which is accessible and everyone can join in.

“I was given plenty of time over several days to do my SATs tests and got high grades, 5s and 6s. This set a high bar for what any secondary school I went to thought I could do: I could not reproduce that level of work as they did not give me the time.”

Maria: “I got involved with the Hackney Learning Trust and as a parent rep on the Complex Needs Panel. I wanted to improve things not just for Ethan, but other disabled children. This definitely helped when it came to transfer to the Year 3 class which was upstairs. By this time Ethan was a fulltime wheelchair user and he could not access the stair lift. So I started a letter writing campaign to get a lift into the school. Initially the borough said Ethan should move to a primary school further away that already had a lift. Eventually after many emails, they understood it was important for Ethan to stay at the school that worked for him and where he had friends and they agreed to put in a lift.”

Ethan: “You also fought Hackney Council to drop all the kerbs on my route to school so I could do the journey myself”.
Were there any things you did not like about the school, Ethan? “I did not like the fire alarm noise. It was too loud! And I did not like the food. I went and saw the headteacher and told him to send the cook on a cookery course.”

Maria: “Secondary transfer was a problem. Initially we thought Ethan would go to Stoke Newington School, our nearest and where all his friends were going, but the corridors were long, crowded and rowdy at lesson changes. The lift kept breaking down and this would disrupt his independence. We looked at Mossbourne Academy which had a good reputation. This was designed as a new build by Richard Rodgers, but the lift was too small and in the stairwell where there would be too many students. The special needs department said they would take Ethan, but we as parents should stay away and not be involved, with no say or input in Ethan’s schooling. This was not our way of doing things and we had heard of cases of wheelchair users being stopped from attending. We also went to Highbury Grove where the SENCO looked uninterested and questioned why we wanted a ‘normal school’, suggesting Ethan would be better off in a special needs school. She said there were too many children with behavioural issues as an excuse. The SENCO from Grasmere came with us and initially the Highbury Grove SENCO denied we had an appointment. Eventually a secondary head we knew suggested trying City of London Academy Islington (COLAI). Angela, the SENCO, met with us and a TA from Grasmere and was very welcoming.”

Ethan “A Year 9 student at COLAI, Keely, showed me round and was very friendly. Another kid with CP, Bayley, gave me a good feel about the school and it felt like the school wanted me. As I settled in I had two good TAs, Mahari and Tosin. The lift is easy to use, I have a fob and can use it on my own. I often choose to go to the Hub where I can do my work and concentrate as there is not so much going on. I speak and the TAs write what I say. Because of my previous experience of history, I was adamant I wanted to take it for GCSEs which I later regretted – the teacher I had sucked all the life out of the subject. During GCSEs I had a great sociology teacher, Neil Robertson, who was inspiring and an equally inspiring English teacher. They sent me notes and handouts by email, which helped a lot.”

Despite getting good GCSEs, the COLAI got nervous about Ethan doing three academic A levels and suggested a BTEC would be better. Ethan with his parents had several meetings with the school, bringing along an advocate from World of Inclusion to convince the school Ethan could do it.

Ethan: “The main problem was that they thought I could not keep up with the work, which I can and I am now getting good marks on my essays.”

Now it has been agreed as a reasonable adjustment that as time is one of Ethan’s big barriers, he will do his A levels over three years taking sociology and politics in Year 12 and Year 13 and psychology in Year 13 and Year 14 with any necessary retakes. The big problem is the length of time it takes Ethan to speak his ideas so an amanuensis writes them down. The school have referred Ethan for an assessment for switching such as eye or head pointing, so he can enter his thoughts independently onto the computer. This seems to be taking a very long time and is crucial for Ethan’s independence. A recent problem is that the punctuation and spelling is that of the amanuensis and not Ethan’s – if wrong he could be marked down in exams. Ethan will also need to check their work.

Ian: “Overall our experience of putting Ethan through mainstream has been positive. He has missed out on after school clubs as TAs are not available.”

Maria: “We employ an extra person out of Islington Direct Payments money to support him with homework. We have just employed Jacky, who is doing a PhD in Sociology, as his PA for two hours five nights per week, so that is very helpful to Ethan.”

Ethan: ‘’Yes. If I try and do my homework with my Mum we fight a lot. So this is better. I also have Chloe who is good. She comes for two nights and works at an ASD special school.”

What’s for the future? Ethan: “I have not thought about it. Probably university.’’

Ian and Maria: “We made the right choice with mainstream. Ethan goes to school with a smile on his face and usually comes back saying he had a great day. We do not recall him being unhappy and school has been a good experience. He has worked with a lot of different people and has self-confidence. Maybe he needs to socialise more and some sort of buddy system would help, but he does naturally like his own space and company. The future looks good for Ethan.”