World of Inclusion went to visit the primary school, one of three in Harrow with resourced provision for children on the autistic spectrum. 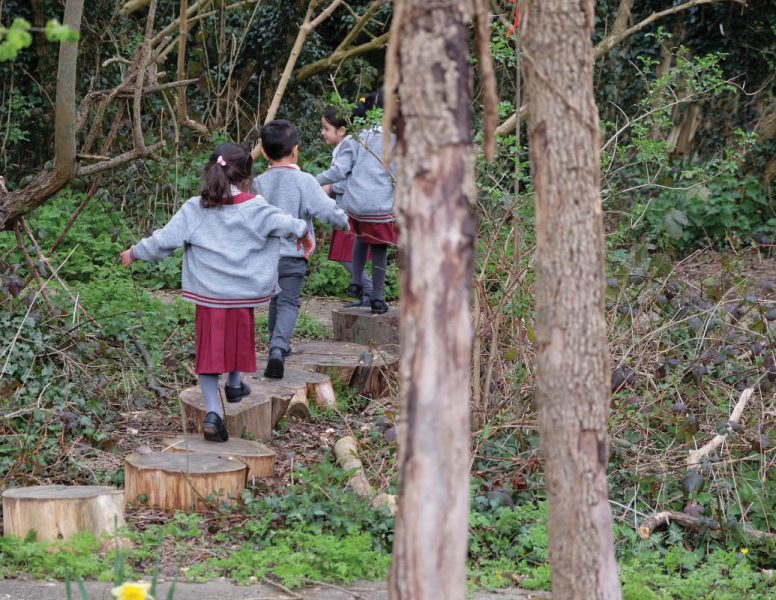 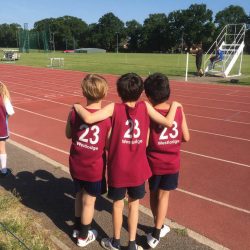 West Lodge Primary School in Pinner in the Borough of Harrow is an inclusive, diverse and high achieving school. Set in spacious grounds, this is a three form entry school with 648 children from reception to Year 6. 5.9% of pupils receive free school meals indicating that the school is in an area of low deprivation. The school has gained a reputation for being inclusive and has worked hard to develop a culture which is attachment aware and trauma informed. The school has a large number of pupils who are adopted from care – in fact the highest within the local authority – and has 34 pupils with an EHCP, 3.25 times the national average for a mainstream primary school, with a further 46 on SEND support. The school is one of three primary schools in Harrow with resourced provision for children on the autistic spectrum. Kaleidoscope has eighteen places, all for children with EHC Plans, and has been custom built with three low distraction classrooms, its own play area, a soft play room, a sensory room, a life skills room and a therapy room. The central corridor doubles as a sensory circuit. 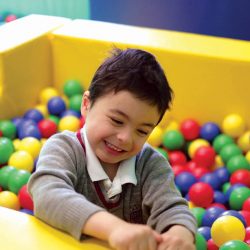 As Headteacher Jim Dees explained, the vision of the school is that each child finds the spark within them, which continues to grow, igniting the spark in others – but crucially this must all start with understanding and acceptance. The whole school is on a continuous learning journey with a rich and broad curriculum adapted to meet all learners. Pupils are encouraged to be autonomous learners and guided to making choices that ensure they are challenged. In 2009 the school was formed by the merger of a first and middle school. Set in spacious grounds they have a number of additional spaces that can be used for a variety of interventions covering social skills, play therapy, counselling and targeted intervention linked to specific subjects. The school also has a music, art and technology room. 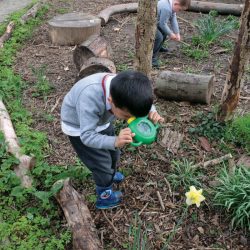 did his initial teacher training in the London Borough of Newham, with placements at Selwyn Primary School in Plaistow and Scott Wilkie Primary School in Custom House where the inclusive approach rubbed off. Jayne Grant who featured in our last issue was SENCO here until last July and was a strong advocate of inclusive practice. The school has a positive reputation for working successfully with SEND pupils. As with all schools the SEND provision is threatened by budget reductions. These were due to come in last month and were successfully fought off by the school, but a reduction of approximately £80,000 in the funding for pupils with an EHCP is due to come into force in April 2020 due to changes introduced as part of the National Funding Formula. Under the formula, schools will receive a notional amount for SEND pupils based on deprivation indicators rather than actually following the specific needs of individual pupils. This will provide a huge challenge for the school.

Jim was keen to point out that Kaleidoscope was not a unit but a flexible resource base where each child has a personalised timetable. The children with the most complex needs spend a high percentage of their day within Kaleidoscope, with a few children spending all day, but most were on a timetable where they spend varying amounts of time in their mainstream classes. All the Kaleidoscope children are on the register of a mainstream class, starting their day there. A lot of work is done across the school on building relationships with buddies, playground PALs and many other opportunities. The school is a Rights Respecting School utilising the UN Convention on the Rights of the Child. Jim explained how under the guidance of the Kaleidoscope Lead the school has made a subtle progression from being autism aware to autism accepting. At a recent autism acceptance day, classes were taught at age appropriate levels about autism, and children on the autistic spectrum were encouraged to share how they feel. Alex Revens led a very well-received session for parents on autism acceptance in the evening. In the last year the school created a new post of a pastoral assistant; Caroline Kinsella who was previously a TA at the school but has specialised in dealing with attachment issues was appointed. Caroline has led whole staff training in this area and she works supporting around ten pupils and families from across the school in a variety of ways – including helping to provide flexible timetabling to facilitate active engagement and access to the curriculum. She is funded out of the Pupil Premium to work with the high number of children who have been adopted from care and others with social and emotional issues.

Assistant Headteacher Hilary Haines took me on a tour of the school which, like many 1950s built schools, was not very wheelchair friendly. We went first to Kaleidoscope where Alex Revens, the lead teacher of three, is backed by six learning support assistants. Each child has an individual workstation with three trays of work for the day in literacy and numeracy. They tend to work in short bursts on this, backed by flexible use of the sensory circuit, social skills group work, daily Attention Autism sessions, other specified activities and outdoor play. Each child has their own visual timetable, and a behaviour policy with a rewards and consequences (not sanctions) system operates here and across the school.

All staff within Kaleidoscope are Team Teach trained and have developed a range of de-escalation and positive handling techniques. When accessing the mainstream class the resource base children also have individual workstations. As we went around the school, we saw children from the resource base working with their peers and this is encouraged with flexible support from the resource base; the school are on a continuous journey of building capacity and skills across the school. For example a Year 3 girl was keen to show us her science experiment demonstrating that a plant with fewer leaves grew more slowly than one with all its leaves because it was less able to photosynthesise. Mrs Kambo, the Year 3 Leader, told us that the mainstream children were very respectful and welcoming to the resource base children because they see themselves as part of a rights respecting school.

When it comes to trips, children are included. Year 3 go for a day to an Outdoor Education Centre, in Hook Hampshire – this helps build familiarity for when they go for a two night residential in Year 4. Those who need it get a great deal of preparation with social stories covering all aspects from food to sleeping arrangements to activities. Mr Revens has introduced the use of virtual reality to create social stories for trips and this has helped prepare children for a visit. The school uses its grounds well with a nature trail, a Celtic roundhouse the children helped build, a Forest School area and pond for nature study, and a creative play area which included a pile of old tyres, pallets, fabric, old computers alongside a mini-assault course with a ‘mud kitchen’.

Talking to Bridie McHaffie (Year 2 Leader), who was just returning with her class from using the nature trail, she made it clear that they use the outdoors as an extension of the classroom a lot. The school has worked with OPAL (Outdoor Play and Learning) which has tr 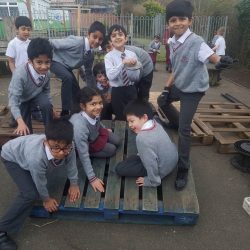 ansformed outdoor play experience for all the children. She has two children in her class from the resource base and the other children support them and see them as part of the class. When one of these children started he had no verbal language; now due to the social interaction with his peers he is very talkative.

The school recently took part in an exciting arts project with a number of special schools within Harrow. A resident artist from CREATE was based in West Lodge for six days and the children from the resource base and other children from Year 4 worked on a large scale piece of art representing life under the sea. This led to lots of discussions on threats to the seas and oceans. The finished piece of work was presented at the Harrow Arts Centre as part of a festival to celebrate the work of the project. Art specialist Nisha Richardson and Art Leader Lucy Taylor helped co-ordinate this exciting project. 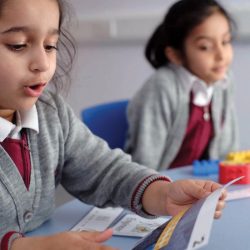 I found my visit to the school very positive and proof yet again that inclusion is the best way to educate all children. However, it was evident that the 104 staff were well trained, supportive and friendly, but behind the scenes a lot of training and thinking had gone into producing a very purposeful, child friendly school with high involvement of parents and pupils.

“We never had any doubt”
Listen to the audio version