Reporting back on ALLFIE’s Day of Action 23rd January 2020

On 23rd January ALLFIE held a Day of Action in London’s Westminster. The day comprised three events designed to push inclusive education onto the Government agenda and highlight its failure to properly support and resource mainstream education for all Disabled pupils and students. 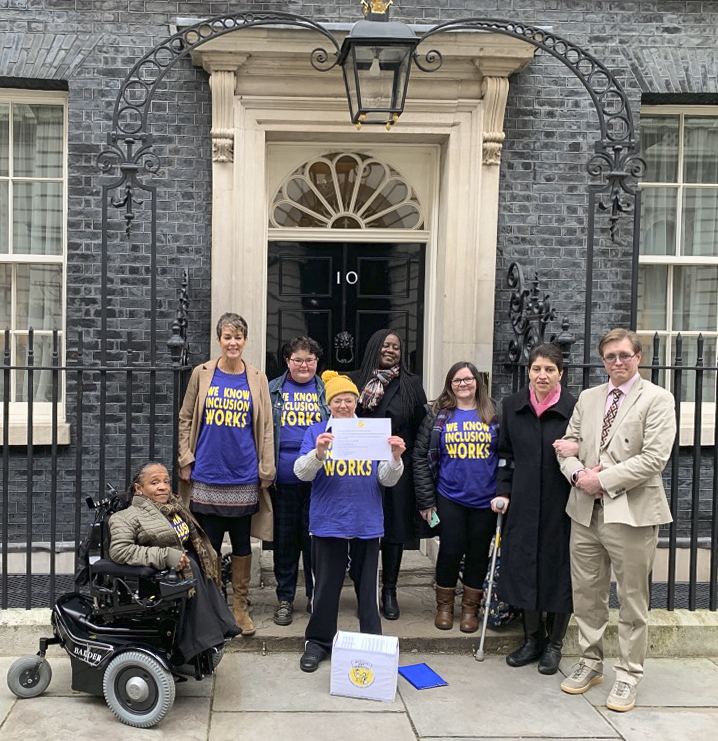 The purpose of ALLFIE’s Day of Action on 23rd January was to highlight the failings and inequality for Disabled people in access to mainstream education. ALLFIE’s wide aim is to get a response from the Government and develop strategy, with an emphasis on the failure to meet UN CRPD Article 24, to achieve a fully funded and supported inclusive education system.

We were hugely impressed with the groundswell of public solidarity and support for our Day of Action. Our three events were extremely well attended by supporters including ALLFIE members, parents, young people and Disabled People’s Organisations. We were tremendously heartened by the unprecedented online support and engagement via social media as well as signatories for our online manifesto, and our petition which has received 108,583 signatures to date. We also received excellent national media coverage:
Evening Standard: Mainstream Should Be For Everyone, The Reader
Disability News Service: Schools are failing legal duties on accessibility plans, says report. By John Pring
Schools Week: Schools failing in legal duty to implement ‘accessibility plans’ By Freddie Whittaker

ALLFIE would like to extend a huge thanks to all who got involved and urge your continued support- let’s keep up this tremendous comradeship and solidarity and momentum for change! 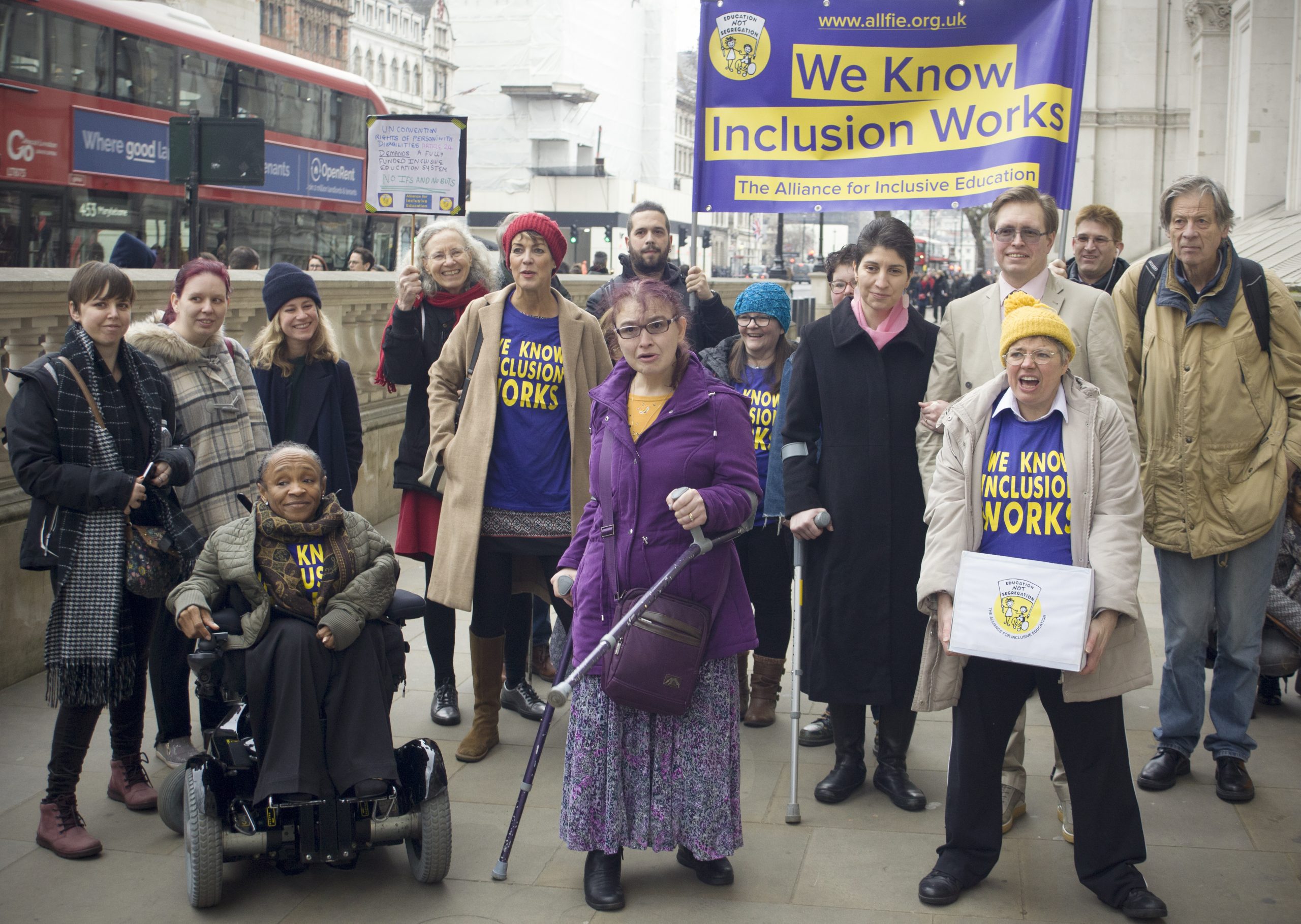 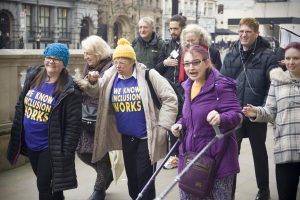 The purpose of the petition was to draw attention to the crisis in SEND caused by education funding cuts and ALLFIE has been completely blown away by the enormous support. This marks a significant milestone for inclusive education, with by far the greatest response we have had for a petition:- over 107,800 signatures when we handed it to the Government at Downing Street and 108,479 at last count. 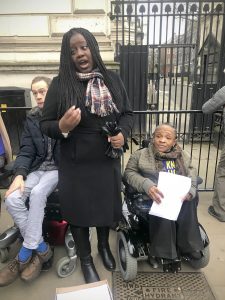 The day began with a march down Whitehall to the gates of Downing Street with our supporters, where we were joined by Marsha de Cordova MP, Shadow Minister for Disabled People. As a Disabled person who benefitted from mainstream education herself, Marsha gave an impassioned and rousing speech. 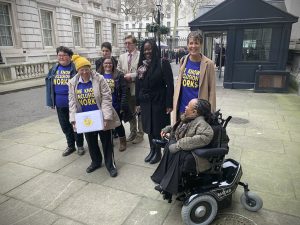 Shortly after midday, ALLFIE representatives entered the gates of Downing Street with our (substantial!) petition box. Simone Aspis and Martine Harding knocked on the famous door of Number 10, accompanied by Michelle Daley, Lucy Bartley, Marsha de Cordova MP, Hilra Vinha and Dr Armineh Soorenian. They handed the signatures to a Government Official, while the gathered crowd outside the gates chanted: “what do want- INCLUSION, when do we want it- NOW!!” 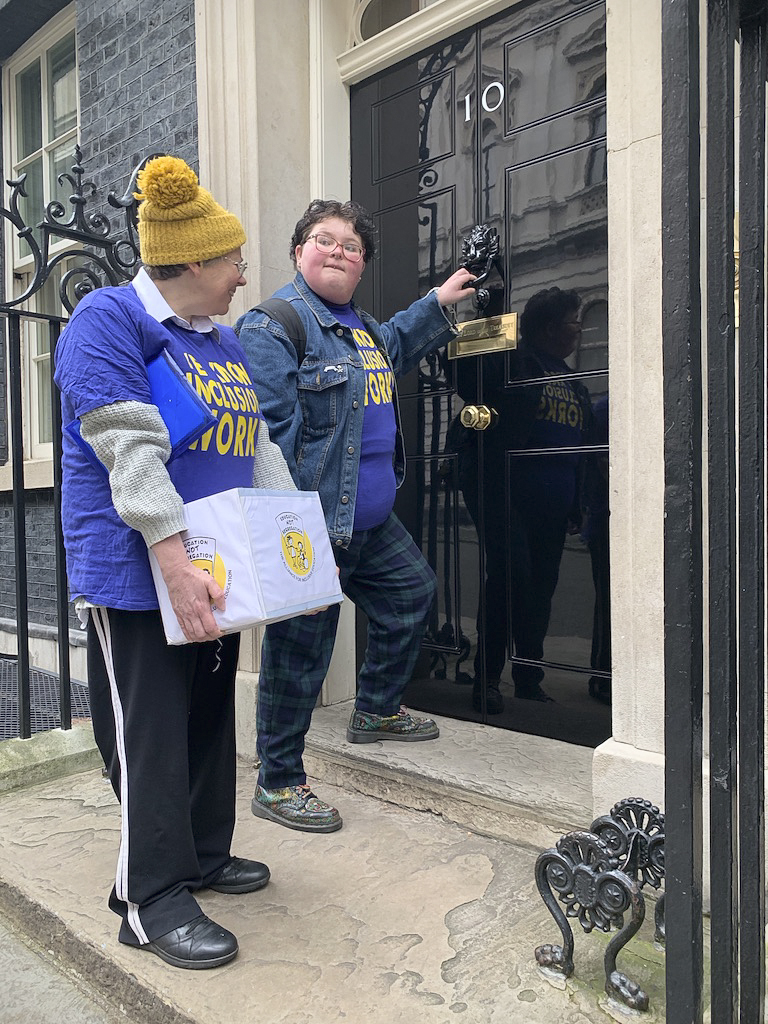 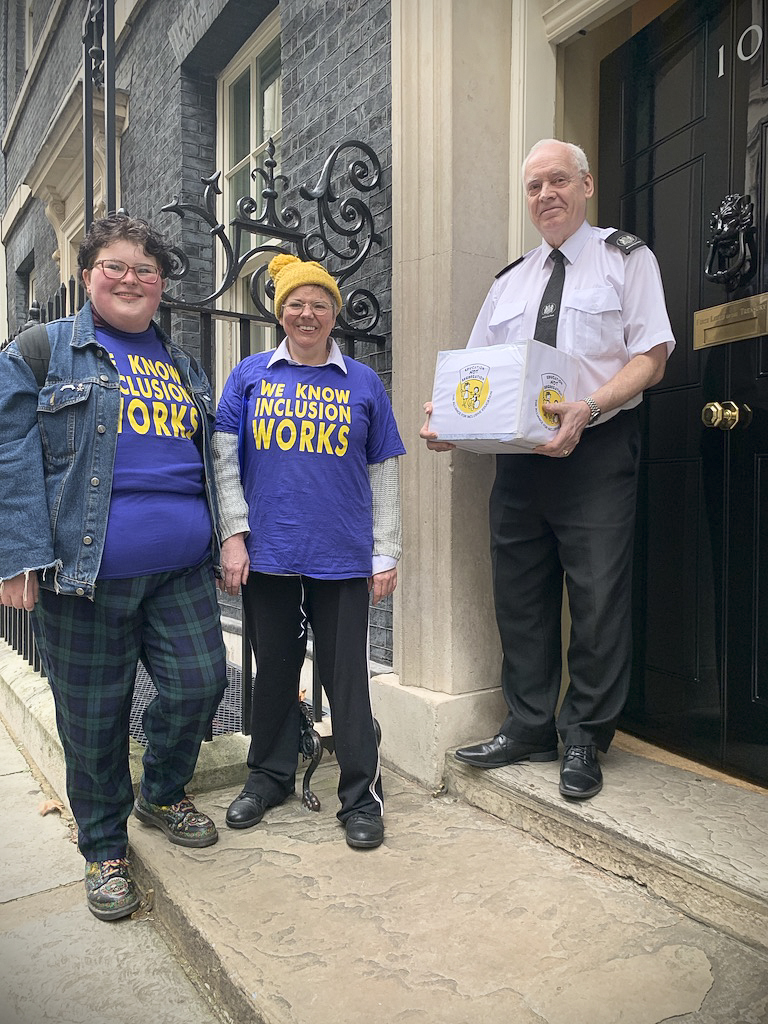 Accessibility Plans as Effective Tools for Inclusion in Schools- Are they working? 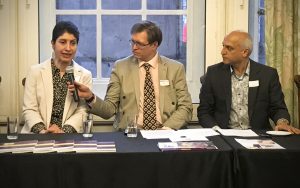 Next it was on to Lawyer’s Suite at the Supreme Court in Parliament Square for our launch of ALLFIE’s long awaited research project report- another momentous landmark for ALLFIE and Inclusive Education. This important piece of research evidences major failings in access to mainstream education for UK Disabled youth, including through many heart-breaking personal accounts. The venue was specifically chosen because of the gravity of the research and report and we were impressed with the attendance, which included young participants and parents who had taken part in the research. 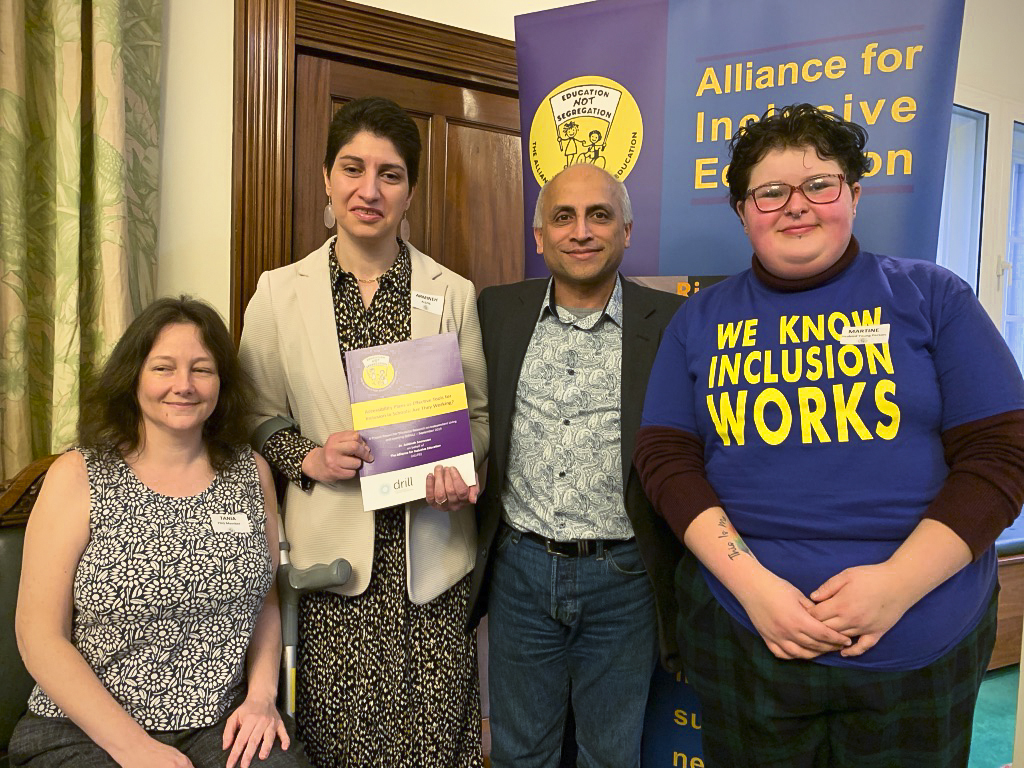 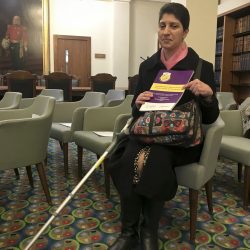 The agenda included: opening statements by ALLFIE’s Joe Whittaker and Dr Navin Kikabhai; a summary of the Project findings by research author Dr Armineh Soorenian; and an open Q&A discussion a panel including ALLFIE Directors and project participants Martine Ifhardinmr and Hildja Vinhah. There were numerous passionate speeches and questions from the floor, including from young people who had participated in the research, alongside disturbing stories shared by parents and Disabled people.

You can read or download the pdf report here.

You can read or download the easy-read version of the report here.

A letter to the Secretary of State for Education

Finally, as day turned to night, we were off again en-masse to the Department of Education. 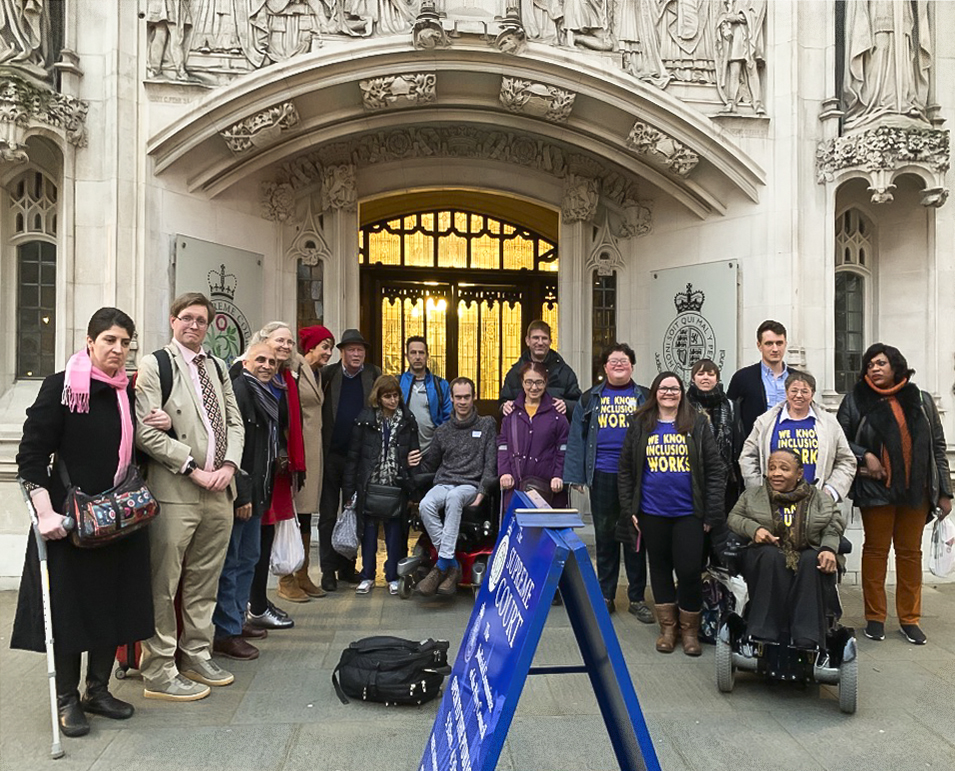 This turned out not to be the ideal timing to deliver important report, petition and manifesto and negotiate a meeting with Secretary of State, Gavin Williamson MP. Staff were unprepared for our arrival and keen to go home. Different staff were sent to talk with us but none of them were in a position to assist with arranging a meeting with the Minister so were sent away. We finally meet with a Secretariat for Gavin Williamson team and are now in the process of organising a meeting. 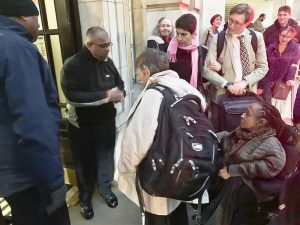 The success of the Day of Action and the number people that spoke out in support of education for Disabled people must be regarded a human rights matter. People have spoken out- they want inclusive education done and they want it now.