The importance of advocacy for people locked up in special education

Dr Paul Doyle writes about his experiences of residential special school, and how important it is for Disabled children to have a voice. 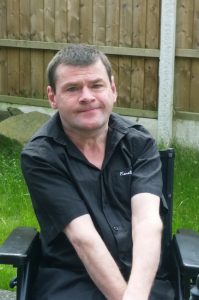 When I was about eleven years of age I heard the people at school starting to talk about me going to another school, I did not understand this. I cannot remember asking my mother and father about this. The next thing I knew was that I was talking with my family about going to a boarding school, I have two older sisters, one older brother and two younger brothers. I said that I would try the boarding school, never really knowing the full implications of this.

This, going to boarding school miles from home and away from your family for three or more weeks at a time is an enormous event in a young person’s life. Nobody, a teacher in school, or anyone from the local education authority, ever spoke to me about going away to school. All young people, especially young people with impairments and/or disabilities should be involved in making decisions about their own future, this is absolutely crucial.

Now I know that people in authority did not care what I, as a twelve year old child, thought when it came to thinking about my future. In hindsight it was as though I went to a residential special education needs school at the convenience of the special school in Manchester and the local education authority. It should have been my decision, or at least my parents’. There was nobody, from what I can remember, who acted on our behalf to explain what it would be like for my family and I if I went to boarding school. Nobody spoke up for us.

The boarding school was in Kent, miles away from my family. I absolutely hated this school. It was horrible. A few years ago I asked my siblings to write what they thought of me going to boarding school. My younger brother, who was ten years of age at the time, said that the school did not look a happy place, and this was when I had just arrived. One of my sisters wrote that when I was at boarding school it was like I was ‘put on to one side’ for a while.

Some children attend residential special school from a really young age. I was thirteen years of age when I first went down to Kent. Whilst I was there it was like we, the other young people and I, were cut off from the rest of society. Children who go to a special residential school at four or five years old may never know what it is like to be part of a society. Once they have left school, providing that they do not get put into a residential special education needs college, they could be fearful of the wider society as they would not have much experience of life in the community at all.

Continuing with the theme of the previous paragraph, before I went to boarding school I used to go out with my eldest brother and watch him play football with his friends; when I went to boarding school all that stopped and it never rekindled again when I came home from residential special school for good. Whoever decides that children and young people with disabilities should go into residential special schools and colleges takes away their family life and friendships and sometimes it might be hard to get this back again.

The more time I spent at boarding school I could feel that the teachers were caring less and less about my education. I was starting to do what I had already done at the school in Manchester and it was extremely frustrating. I tried to tell the teachers about what I was feeling but they just did not take any notice of me – it was awful. I did not have anyone to talk to.

There must be thousands of people with disabilities who have had, or are having, similar experiences to me. To quote my sister again, “It was like I was put on to one side for a while.” I was really lucky because whilst I was at boarding school my mother and father never left it three weeks without seeing me, they came down to visit me at school in between holidays. A lot of the children and young people at my school did not see their families for six or seven weeks at a time.

During the school holidays and when my mother and father, and some of my siblings, came to see me in term time I could talk to them and tell them how I was feeling. At one point we, my mother and father and I, thought they were coming to bring me home for good. The headmaster wanted to talk to us in his office. The headmaster said that if I was to go home at that time (I was fifteen years of age) there would be nowhere for me to go. My previous school in Manchester had changed so I could not go back there. I stayed at the residential special education needs until I was sixteen.

I actually felt like a prisoner at this residential special school. It was bad enough during the week when classes were on and hardly anyone took any notice of me. The evenings and weekends were dire. I had no real friends at school. All I did in the free time was go around school in my electric wheelchair not talking to anyone. I could not concentrate on anything. At home I would watch the television with my family but at boarding school I just could not get motivated even to do this.

The Importance of advocacy

Sometimes, as the man I am now, I wonder whether I should have told people what I thought of boarding school, but I was never encouraged to do this. By reading the last sentence you might think that I blame myself for going to residential special education needs school and not doing well. Looking back I think that I did have the capacity to speak up for myself but, as I said before, this was never discussed nor encouraged.

All the things that I have said here require some form of advocacy. Take myself as an example: before I went to residential special school, I had no idea what this would entail. It was after asking my mother and father that I knew where and how far Kent was. Nobody at my special school in Manchester told me just how far Kent was and how much I would miss my family. One could say that they were not to know, but it was evident to everyone that my family are very close.

When I think about it now I cannot remember any of the teachers at the school in Manchester talking to me about going to boarding school. Some kind of guidance on this transition may have stopped me from going to residential special school and my positive educational prospects might have begun earlier.

The sense of being ‘locked up’ in residential special school was a very real experience to me. Thinking back it was a frightening ordeal being at residential special school on your own more or less. What I mean by ‘being on your own’ is not having the confidence to talk to people and tell them how you feel. I knew what  I wanted to say to teachers, that I wanted to do more academic work and, indeed, I knew that I was able to do more work on the basis of what I had done at my previous school. If only I had an advocate.

Advocacy, speaking up for oneself or having someone speak up for you is a really important concept. My PhD thesis is about advocacy for young people with disabilities. The fieldwork for this piece of work was set in special education needs school. The young people at the school and I held advocacy sessions within the school. There was one particular young person who was around seventeen years of age, who was about to leave school in a couple of years’ time and he had no method of communication. This must have been absolutely horrible and very frustrating for him.

Staying with this particular young man as an example, I thought that this special education needs school, where I carried out the fieldwork for my PhD, was relatively good for a special school but when I knew what was happening with this young person it tarnished my feelings towards the school. This scenario seemed strange to me. The teachers at the school were keen for me to talk to the young people, and yet, when it came down to them talking to their own students they just did not listen.

From my observations when I was at my own residential special school, and I had a lot of time to observe as the teachers did not give me anything to do, I noticed that quite a number of the young people were learning. I felt that the teachers at my school did not have enough patience with the children and young people who had the severest of impairments – I include myself in this category. Going back to the young man at the special school where I carried out the fieldwork for my PhD thesis, I found out that he could indicate ‘Yes’ and ‘No’ by moving his eyes up and down. I could not believe how simple this was and yet the school failed to recognise that he could do this. It must have been so frustrating for him. I feel that having multiple impairments myself, including a speech impairment, I was able to understand what it is like to have people not know what I am saying, so infuriating.

It is absolutely vital that people with impairments and / or disabilities are listened to and advocacy is an integral part of this. Giving people a voice enforces their role in society – special schools do not consider this an option. Ideally there should be no special education needs schools at all and there should be a whole new education system where children and young people with disabilities and / or impairments and children and young people who have no disabilities and / or impairments are educated together. At the time of writing, with austerity still going on and the unstable economy, I cannot, unfortunately, see total inclusive education happening anytime soon.

Every special school should have at least four or five advocates for the children and young people to talk to. The conversations between children and / or young people should not be just about what they want to do once they had left school but they may want to know what was happening in school. Those who have brothers and sisters may be listening to them about what they are doing at their school and the children and young people who attend the special school may be thinking why this was not happening in their school. An advocate would be able to help to voice their concerns with the teachers, this is essential.